The Market was originally a Lucky Grocery Store, but was purchased by Town & Country Markets and re-opened as Ballard Market in March of 1986.  The Market became famous in those early days for “Singles Night,” a way for single people in the community to meet in the grocery store. It eventually fell victim to its own popularity when the fire department requested it be discontinued because of overcrowding.

The Ballard Market originally had a gigantic awning on the front of the building that stretched corner to corner.  The company that made that awning claimed it was the biggest sign in Seattle at the time, and stories circulated about the awning being visible to airline pilots. The awning also featured the sailboat that was to become the company’s logo.

In 2003, the giant awning came down, replaced by the equally imposing series of four-foot-tall letters spelling out Ballard Market. 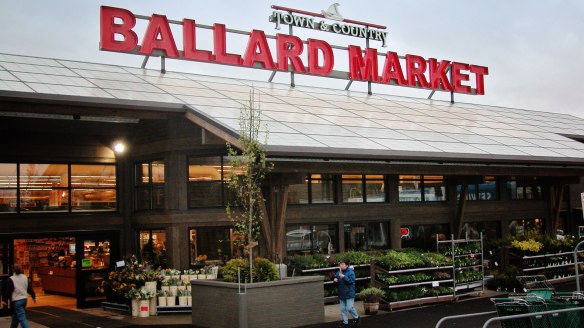